As a further testament to the off-road capabilities of its family of WILDPEAK tires, FALKEN, has been chosen by Toyota Motor North America as the original equipment on the new 2020 Toyota RAV4 TRD Off-Road.

The tire selected is the Falken WILDPEAK All-Terrain (or A/T) Trail 01A, size 225/60R18 (100H-rating), and will be supplied for the first time to RAV4s beginning in late 2019. Tires for the vehicle will be produced in Japan starting in the third quarter of this year.

“The dedicated WILDPEAK A/T Trail will be the exclusive OE tire on the TRD Off-Road, and we are very pleased to support Toyota with this product, and honored to become a supplier to the highly respected TRD model line,” stated David Colletti, Falken’s Vice President, Original Equipment.

The WILDPEAK A/T Trail is Falken’s first all-terrain category tire that has been developed and marketed specifically for crossover vehicles. Falken has already earned high marks for its durable, optimal off-road-capable line of products under the WILDPEAK name, and the new A/T Trail will quickly complement a vehicle category that is in high demand.

“Most tire manufacturers typically target trucks and SUVs with their all-terrain product,” noted Colletti, “but increasing demand for both rugged and capable crossovers requires the need for a tire earmarked for this category and vehicle.

“Toyota realized its customers wanted a specially tuned RAV4, and based on Falken’s strong connection to high performance, encouraged Falken to provide them with a dedicated tire,”Colletti added. “We’re proud to introduce the WILDPEAK A/T Trail 01A as the result.”

The aftermarket version of this tire will be named the Falken WILDPEAK A/T Trail. With rugged aesthetics to support modern crossover utility vehicles coupled with off-road and snow capability and durability that encourages exploration with confidence, the A/T Trail will appeal to owners of new crossovers as well as a replacement tire for late model versions. The A/T Trail will be available in 30 sizes with official sales starting late 2019.

Toyota Racing Development, known worldwide as TRD, is the in-house high performance operations for Toyota and its sister brand, Lexus. TRD handles the creation and development of various tuning products and accessories, including performance suspension components, and wheels that help improve the drivability and handling of its street cars, trucks, SUVs and now Crossovers for more performance. TRD also supports the manufacturer’s racing interests around the world.

As the Toyota RAV4 was redesigned for the 2019 model year, the 2020 RAV4 TRD Off-Road is a new addition for the vehicle and will feature a number of unique components to improve its performance and capabilities, one of which is Falken’s WILDPEAK A/T Trail 01A tire. 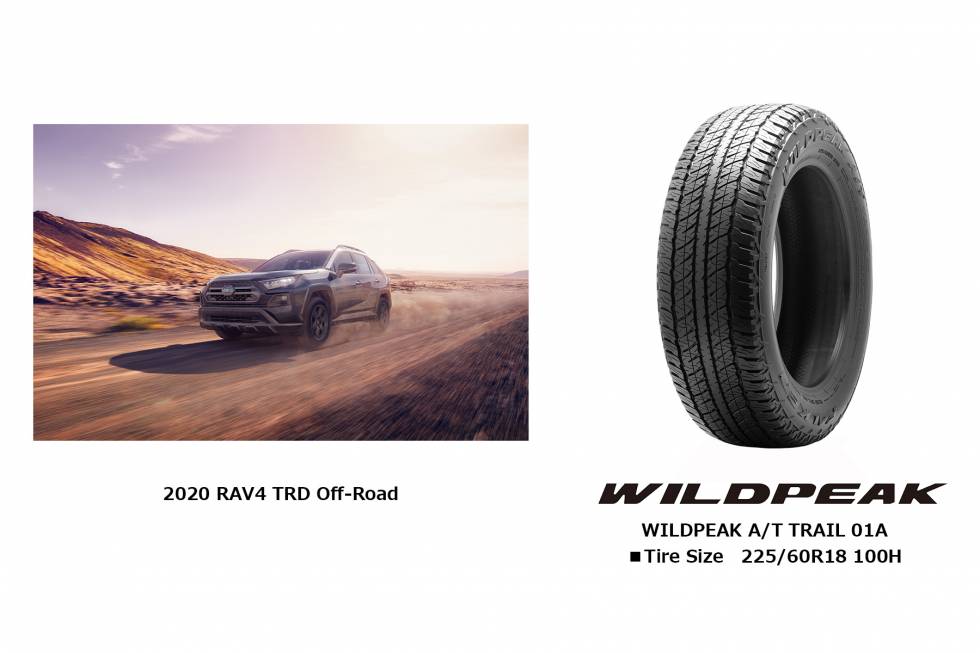